Tsepelovo: It is a beautiful village built at an altitude of 1,080 meters and it is 51 km from Ioannina. The village is known since the 16th century from the first school tha was built in 1700. In 1868, it was the capital of the Turkish authorities of Zagori. In Tsepelovo have survived the houses of the families Kentro, Papazoglou, Vazima and Tsavalas.

Just outside the village is the monastery Rogovo dedicated to the memory of John the Baptist. The church is located after the buildings of the guest house and ancillary spaces and built by Pulcheria in the 11th century. The church was completely destroyed and on its foundations was built a new church in 1749, which has three-nave church, narthex and octagonal dome. In 1756 artists from Kapesovo decorated the church with gilded iconostasis and frescoes.

Koukouli: At the picturesque village of Koukouli you can admire the old school with the five taps, many mansions, the fountain of Mpasias- Manthos and the Church of the Assumption dating from 1788.

At Koukouli there is the Natural History Museum Lazaridis which hosts the rare collection of flora of the naturalist Kostas Lazarides. Also, you can see the stairs of Koukouli joining Kipi with the village and the Bridge of Kokori and Kalogeriko which are located between the villages of Kipi, Dilofo and Koukouli.

Kipi: The beautiful village of Kipi is the oldest settlement of Zagori and was the former capital of Zagori. It is built on a rocky hill and it is 39 km from Ioannina. Kipi is the village of the region and it is known from 1431. Paved streets, fountains, mansions, stone bridges and many attractions of Kipi will impress you.

In Kipi there is the Folklore Museum of Agapios Tolis and includes a rich folklore collection of 40.000 items of everyday life of the whole region of Zagori. The collection was collected with care by Agapios Tolis.

Some of the attractions you can admire in Kipi are, the church of St. Nicholas of 1779, the Monastery Baya 1841, the church of Agia Paraskevi and the bridges of Kokori, Lazaridis, Pitsoni, Mylos, Dovrous and Merissi. From Kipi starts Skala that joins Kipi with Koukouli.

Asprangeli: The mountain village Asprangeli is the first village of  Zagori that we met and it is the seat of the Central Zagori. It is built at an altitude of 990 meters on the slopes of Mitsikeli and is only 30 km from the city of Ioannina.

Ano & Kato Pedina: Ano Pedina is one of the oldest villages of Zagori, built at 900 meters above sea level. In the village you can visit the Labriadios School, the Monastery of Annunciation of 1793, the church of St. Demetrios of 1793 and the monastery of Agia Paraskevi of 1750.

Kato Pedina is built on the slopes of three hills and at its foot there is a plateau with six stone wells. The settlement is known since 1361. In Kato Pedina you can visit the monastery of the Archangels of 1591, the church of Saint Athanasius of the 18th century and the ancient tombs of the 11th and 12th century have been found at the place „Gortzia“ and „Lakkia Spanos“.

Kapesovo: Kapesovo is amphitheatrically built on the edge of Messaria at 1.100 meters altitude. The village is 43 km from the city of Ioannina and it will impress you with its many beauties. Around the village are discovered traces of ancient wall, which bears witness to its history. You can admire the church of St. Nicholas in 1793, the church of the Assumption of the 18th century Mary.

In Kapesovo its worths a visit to Paschaleio School with the small folklore museum that has valuable and rare exhibits such as one of the 13 surviving copies of the Greek Maps of Rigas Ferraios. You can also see the impressive path with the 1.200 steps that connects the village Kapesovo with Vradeto.

Vitsa: The mansion village Vitsa is one of the largest villages of Zagori and belongs to the municipality of Central Zagori. Built at an altitude of 960 meters and 37 km from the city of Ioannina, Vitsa is a characteristic example of local architecture with many houses, churches and stone streets.

Dilofo: The mountain village Dilofo is built at an altitude of 880 meters and boasts some of the most beautiful mansions of Epirus. In Dilofo there is the tallest house of Zagori with a height of 13,5 meters and a large school of I. Anagnostopoulos.

Vradeto: Is the highest village of Zagori, built at an altitude of 1.340 meters. Behind the village is the mountain range of Tymfi and in the other three sides is the gorge of Vikos. The view fromVradeto is unique.

Monodendri is 39 km from Ioannina.

From Athens you can reach Zagori via Patras and Rio Antirio. After about 20 km from Ioannina you will meet the first villages of Central or East Zagori. The distance is 445 km and the journey takes about six hours.

From Patras you get to Zagori via Rio – Antirio. The distance is 236 km.

From Thessaloniki you can get to Zagori via Egnatia Odos in Ioannina. The distance is 370 km. You can also arrive from the Egnatia Motorway via Grevena.

From Metsovo after 40 km you will reach the first villages of East Zagori.

By car you can reach Zagori through the highway Kozani – Ioannina from Kalpaki or Metamorphosis (Karyes).

Daily bus itineraries from Athens, Patras, Thessaloniki, Arta, Preveza, Igoumenitsa to Ioannina and then there is a connection from the city of Ioannina by suburban bus to Zagori. 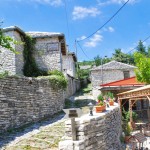 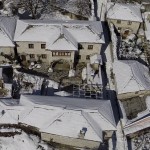 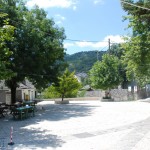 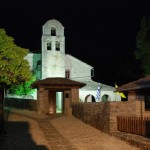 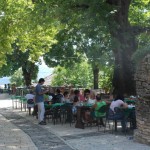 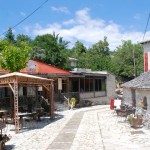 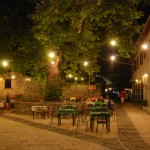 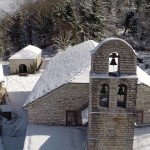